Does Ruby have a shelf life?

I came across this article from a year ago of 5 Programming Languages Marked for Death. They have Ruby marked as the second language. In my opinion it’s not a very informed opinion. It’s based on a decision Twitter made a while back. What do you think? Will Ruby ever die, and/or be replaced?

These guys just want page views and they’ll write anything to get it.

Basecamp has been running on Rails, thus Ruby, for 10 years now, and as far as I’m concerned, they have a better, more profitable business than Twitter.

All the engineering time they wasted rewriting their platform could have been used to find a good business model.

Ruby and Rails are not going anywhere because they’re much easier to learn compared to others. And there are always new programmers entering the ecosystem.

There are too many people who’s careers and livelihood depend on Ruby for them to let it die.

Despite other languages now being more Ruby-like, Ruby still has a large and brilliant community and a huge array of tools and gems that allow people to quickly get stuff built. I would always turn to Ruby when I did not need anything that needed the sort of concurrency that Erlang offers, or something else that some other language excelled at.

Most of the time Ruby is a fantastic pick.

Wow. He’s basing the demise of Ruby on a - at that time - 3 year old article. Also on the fact that people coming from “C-style languages” have a hard time understanding it.

The same goes for Perl. The newest version was released just 40 days ago.

Flash is still used widely for games (just look at sites like http://www.kongregate.com/)

As a freelancer I see a bigger uptake of Ruby (in the UK at least) than ever before. While 5-6 years ago there would be only a few Ruby contracts concentrated in the London area, now there are many more all over the country, We now have have the UK government using Ruby as part of its digitization programme. That’s something that would have seemed incredulous 10 years ago. I also see large, household-name corporations like BSkyB and the BBC using Ruby to support enterprise-level systems (they’re both big fans of Sinatra, BTW). A lot of people have groked that they can develop stuff quickly and safely with Ruby. Ruby is going nowhere but upwards and onwards.

If we think of Ruby not only as it’s standard implementation (MRI and etc) but as idea, we’ll see that it has much more potential than anything else.

We can use Ruby on frontend as Opal, RubyMotion for mobile, and soon we will lay our hands on most performant and pleasure to write backend with Crystal (and as well use Ruby as true multipurpose lang via it).

I believe Matz has answered this question in his talk: 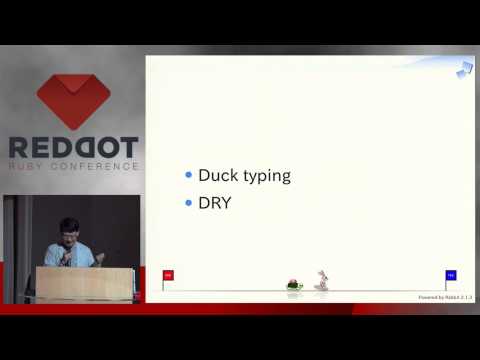